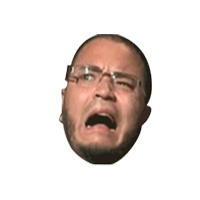 Wutface is the face you make when something shocks you or you are surprised to see. It’s the face of disbelief. It holds the same meaning of saying, “like, really?” or when we say “what?” while in wonder.

In the visual of this emote you get to see a man with glassed making the face of shock. The man is a twitch employee. His name is Alex Mendez. His genuine expression in the emote makes it more relatable to use in such moments.

Anytime anything on stream shocks you or makes you disbelief you can use this emote. It can be a reaction to some action or statement the streamer does. You can also use it to react to someone on chat as well. You can use this emote if a streamer fails to do something really easy as well. It’s more in the troll way rather than the actual use of the emote.

This emote became a thing in 2014. It happened during a gaming competition. In that competition, the twitch employee Alex Mendez was sitting on the audience seat. Suddenly the camera caught him making that face of shock during a break. Since then it has been used for expressing shock or disbelief on twitch. To date, it’s one of the most used emote to express such emotion on twitch. It 27th most used emotes on twitch stated by Streamelements.

There aren’t many emote to capture similar emotions on twitch as this one.

It’s a twitch official emote, so you don’t need anything else to use this one.

To add some spice in the twitch chat and express yourself better you can always use this emote. Wutface truly captures the expression of a person in shock or disbelief.