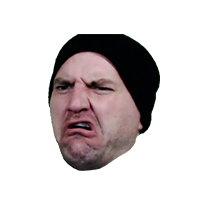 Dansgame is the emote you can use for expressing disgust towards something. It can be anything that makes you feel disgusted. So, the meaning can vary a lot based on the context. But necessarily it holds the notion of saying, “Ew, that’s disgusting”.

The emote visually is a guy who makes a disgusting face to capture the expression. The guy is a famous twitch streamer. His twitch name is DansGaming.

The emote holds the expression of being disgusted. But you can use it in various contexts. You can use the emote to react to something the streamer does or says. This is to show that whatever they said or did is a bit discomforting. You can do the same thing with others in the chat. Another way to use this is to react to the game. Sometimes some gaming visuals might be a bit disgusting to look at so you can use this emote as a reaction to that as well.

DansGaming is a streamer who has been live-streaming even before twitch existed. So, when this was specifically made you can’t really tell. But it’s somewhere around 2010 that it became a thing on the internet. The emote actually became popular in 2016 through its use on twitch. Also, this is one of the most popular originals emotes on twitch tv.

You can’t really find something similar to this emote. This is one of the reasons that it’s still as popular as it was in the beginning.

It’s a twitch official emote so you don’t need anything extra for this one.

Well, never stop expressing yourself on twitch. That’s the whole purpose of using emotes. With dansgame you can call out something discomforting from the stream and that can be a good way to help the streamer.