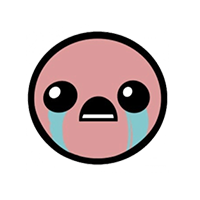 biblethump is an emote equivalent to crying. You can show your sadness towards the stream using this emote. It’s just like saying “this is so sad”. Now, it can be said in a sarcastic way as well.

This emote visually is like usual emoticons. It’s a red animated character with a shocked face and tears in its eyes. The character is from a game called “the Binding of Isaac”. It’s basically a crying emoticon but with a lot more details in the eyes. However, in the game, his crying actually means bleeding.

biblethump became a thing exactly in the same year the game was released. The game came out in 2012. Twitch officials liked the game and the concept so much that they added this character as an official twitch emote. Later on, in 2013 a website was launched named Icryeverytime. You can check it out here https://icryeverytime.com/. This website made the emote more popular and it’s the most used emote for crying on twitch.

You can’t really find many similar emotes to this one.

It’s an official twitch emote so you won’t need anything extra to get this.

There is nothing wrong in the express that you are crying and you can’t cry with words. So, this is a great way to show that you are sad on stream. You can also use this as a meme too. This makes it much more fun.