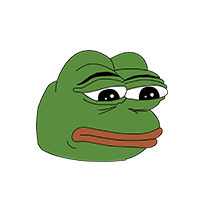 No twitch chat is complete without the PepeLaugh emote in there. It’s an emote that expresses extreme laughter. Whether you told a joke and added the emote or you use it as a reaction. It all expresses that you are laughing. It’s just like saying “laughing my ass off” or “laughing out loud”.

This emote is a visual of a frog. This comes from the famous Pepe the frog family. There are lots of other emotes with this face. In this emote you get to see Pepe the frog laughing so hard that tears come out of his eyes and he can’t keep them open.

This first appeared in 4chan which is a website like a bulletin board for images. It came out in 2014. Later on, in 2017 the emote came to FrankerFaceZ which is a browser extension for twitch emotes. Just like all the Pepe, the frog emotes the credit for this one goes to Matt Furie who is a comic illustrator. Since its origin till now it’s almost anticipated when this emote is coming.

There are lots of other emotes that express the same emotion. There is LUL, KEKW, ROFL, etc.

You can get PepeLaugh by installing the BTTV or FrankerFaceZ extension in your browser.

This is one of the most used emotes on twitch. So, if you are a twitch user you must know about this one and how to use this.