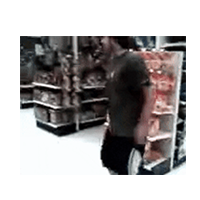 Sourpls  emote is used for expressing extreme happiness. It also expresses that you are living life carefree and enjoying what’s happening. It’s mostly used for hyping others before something great is happening.

The emote visually is a guy dancing in a supermarket completely carefree. It’s an animated emote.  The guy in the emote is a twitch employee. And the place is Toys R Us.

You can use SourPLS whenever you want to show that you are extremely happy watching the stream. The common use of this emote is to get hyped for something extremely happy coming. For example, it’s a good emote to use when you are excited to see someone coming or something happening on the stream. It also indicates a carefree attitude and enjoying everything that happens around you.

The emote takes us back to 2007 when the twitch employee uploaded his video. In the video, he was dancing carefree at a Toys R Us outlet. The video just expressed living in the moment and enjoying every bit of it. Watching that video also gets you hyped up to do the same thing as well. Later on, someone added this in the BTTV emotes. It’s a GIF image rather than a usual emote. So, it became quite popular over time and there is nothing like this on twitch emotes.

You won’t find anything similar to this emote. No other emote captures the same emotion as this one.

You must have a BTTV extension to use this emote. Also, you have to customize some options on BTTV settings. As this is a GIF you have to configure the settings to show gifs.

Using this emote is a great way to create excitement on chat. Streamers love to see that kind of hype and this makes them hyped as well.