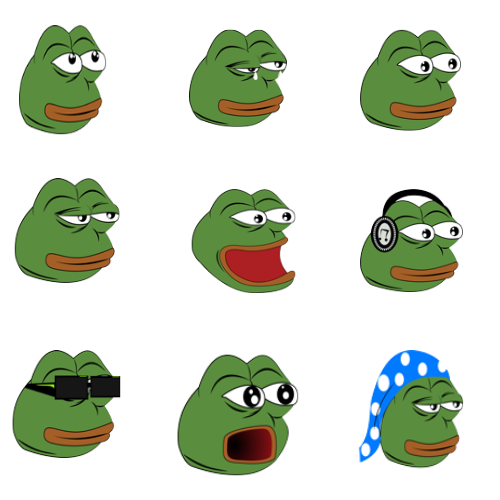 The emote pepejam is basically Pepe the frog jamming to music. It means you are enjoying the music that is going on in the background of the stream. There is not sentence to describe the feeling it’s just like jamming to good music in real life.

In the visual of the emote you get to see Pepe the frog wearing headphones with a smile. This is an animated emote so he moves his head up and down just like we jam to good music.

This emote is used whenever you like the song playing in the background. This emote is mostly used on streams that are based on music. There are many streamers who come on stream and play different kinds of instruments or sing songs. You will get to see this emote on their chat quite often. Also, it can be used as a meme too. Sometimes you can use it to meme the streamer for playing music that you don’t like. It’s all in good fun.

It’s yet to be known that when the to emote first came to be. But just like all other pepe the frog emotes the credit of this one also goes to Matt Furie. Later on, someone added a headphone and made this animation. It became quite popular throughout the internet and added to discord in 2018. In the same year, xQc added this emote on his stream. That’s where it gained popularity on twitch. Aside from that many people have used this emote on their videos as someone jamming to music.

The closest and similar emote to this one is the catJAM. It can potentially replace pepejam forever.

You will need to have BTTV or FrankerFaceZ extension on your browser to use this emote.

Well, you can’t really express loving music without using an emote. You can’t put that feeling in words. That’s why it’s a great emote to use in twitch chat.