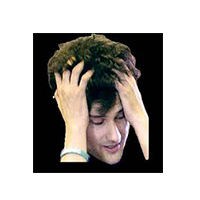 Notlikethis is an emote that expresses that something unexpected has happened on stream. It can be a reaction to something sad or something stupid. It holds the notion of saying, “It shouldn’t have been like this” or “You don’t do it like this”.

In the emote you will get to see a man with his hands on his head as if he messed up. The face of the emote is a twitch employee named Ben Swartz.

The image of the emote is from Ben Swartz’s reaction to a professional championship. It was a reaction to HugS86 losing the championship in an absurd way. This event occurred in 2015. Thus, it became the iconic face of disappointment. And the phrase not like this comes from the famous Hollywood movie matrix. There is a scene in the movie where a character says “not like this” before getting killed off. As if they were disappointed to die in such a manner. Combining these two things this emote came to be.

There aren’t many similar emotes with the same kind of emotion. Pepehands can be used to capture somewhat similar kinds of emotions.

This is an official twitch emote so it doesn’t require any extensions or plugins.

To liven up the chat you can always use emotes instead of texts. They are much more fun and they can capture the emotions better. Also, using notlikethis would be much more convenient than explaining all the things.