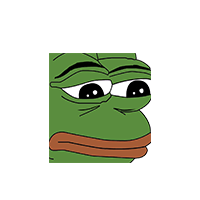 You can react to intense situations on twitch streams using this MonkaW emote. Whenever the games get too intense or the situation gets hyped up you can react with this emote. It’s almost as if you are saying “now, what’s going to happen?” or “Is everything going to be okay?”. It’s like you are freaking out and worried about the situation.

The emote visually is of a popular emote family on twitch. It comes from the Pepe the frog family of emotes. In this particular one, a frog is seen to be worried and tense about something. And the zoomed-in face increases the effect a lot.

People often use this emote in an intense fight on a game. It’s anticipating the boss fights in certain games. Or any intense situation of games gets this kind of reaction. You can also use this to fake your concerns about the situation as well. There is no bad notion to this emote so you can use it however you like inappropriate situations.

The emote is related to Pepe the frog meme family. So, it has been there for quite a long time. The original artist of this emote is Matt Furie who made the comic book that had Pepe the frog. The first appearance of this was in 2011. Later on, in 2016 the emote came to BTTV extension. It gained a lot of popularity through the community of twitch streamer Forsen.

There are no similar emotes to this. But there are different variations of MonkaW emotes that you can find.

You can get monkaW by installing the BTTV extension in your browser.

It’s a pretty useful emote to have. Because streamers go through intense situations every now and then. And if you can liven up the chat by using this during that period it wouldn’t be a bad idea after all.