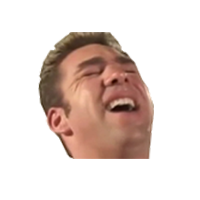 gachiGasm is the emote to express satisfaction towards something that happened on stream. You can also use it to express liking something a lot. It holds the idea of saying “this is so good” or “this is so satisfying”.

In the visual of this emote you get to see a man making the face of pleasure where he closes his eyes and opens up his mouth. The man is an adult movie star named Billy herrintong.

gachiGASM is the combination of two words. The part gachi comes from the Japanese word gachimuchi. It means a fat yet a muscular man. And the part gasm comes from the word orgasm. It was first originated in 2015. After the adult actor, Billy Herrington got popular one of his images of having an orgasm, later on, became this emote. In the twitch community Forsen, a twitch streamer made this popular. It gained even more popularity through some YouTube videos.

There are some other emotes that express the same notion as this. One is kreygasm. There is another animated variant of this one which is called gachiBASS.

You can get gachiGASM by installing the BTTV extension in your browser.

Well, now you know all the fuss about gachiGASM. Use it to show your satisfaction and appreciate the streamers.