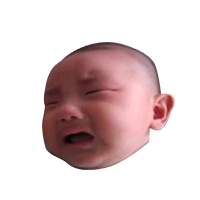 babyrage emote is a reaction to someone throwing tantrums like a baby. When the audience thinks that the streamer or someone from the chat is throwing tantrum and about to cry like a toddler, they use this emote as a reaction. It’s like saying “stop throwing a tantrum like a child”.

If a streamer is getting angry and throwing tantrums like a baby does you can use babyrage. People usually use it when the streamer gets angry and starts throwing insults towards the chat. Similarly, if someone from the chat does the same thing you can react to that with this babyrage emote. It’s not something you express, it’s just to react to the person who throws a tantrum. It’s more of a troll emote.

The babyrage emote has been in the Twitch community for a long time. There isn’t any significant time to recall when it was first used. It’s one of the originals emote in twitch. This emotes gained the most popularity in Arteezy’s streams. He is a DOTA 2 streamer who is known to rage in his game when he fails to do a certain play.

There aren’t many similar emote to this. It is basically mocking someone for throwing a tantrum.

How to Get this?

It’s twitch’s own emote you don’t need to install or do anything to get the emote.

babyrage is a great way to mock someone without being offensive to them. You are just pointing out they are throwing a tantrum unnecessarily. It’s also a fun way to interact in the chat.