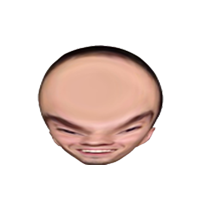 Whenever a streamer does big brain gameplay you can react to that using this 5head emote. This expresses you appreciating or complimenting them on their big brain plays. The big brain plays basically mean smart and intelligent gameplay. It’s something like, “that was a smart move”.

This emote is a variation of the emote 4head. It’s the face of a renowned league streamer Cadburry where he is smiling. In the 5head the forehead of Cadbury is enlarged to express that he has a big brain.

When to use 5head

This emote appeared in FrankerFaceZ in 2018 for the first time. The emote is of the streamer Cadburry with an enlarged head that signifies a big brain. It gained popularity through Cadbury’s own community and also through xQc’s community. xQc fans would spam this emote on his chat whenever an m0xxy would say or do something smart on Overwatch gameplays.

There aren’t many emotes that can express similar emotions on chat. However, people tend to write 200IQ to express the same kind of notion which basically means smart gameplays or statements. It’s also a reaction to something smart.

You can get 5head by installing the FrankerFaceZ extension on your browser.

You can complement your favorite streamers on their smart plays with this visual emote. Especially, if you watch a lot of strategy game streamers you can use it a lot.